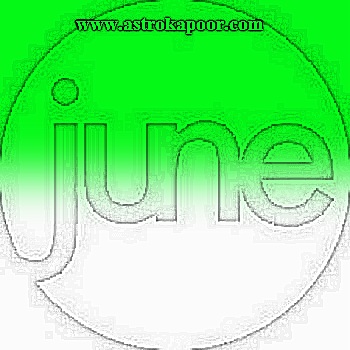 PEOPLE BORN IN THE MONTH OF JUNE

The month of June is dominated by the planet Mercury and the person is governed by the characteristics of Mercury.

Character- The Mercurian Rasi for this month is Gemini which has the symbol of twins. The main characteristic of the person is duality and he plays double role in life. It is very difficult to understand him or her. Sometimes he will be hot tempered and sometimes cool tempered. He is sharp, brilliant and quick and can win over his rivals. He is ambitious but hardly knows what he wants to achieve. His company is enjoyable, but only when he is in the right mood. He is usually restless and wants what he dose not have. He can be successful as an actor and a lawyer. He is very sensitive and finds difficult to bear any strain of worry or disturbances and experiences brain exhaustion and nervousness.

Health- he is not robust in health. His main health problems are due to mental activity and uneasiness of mind. He therefore suffers from nervous trouble. He is also liable to suffer from blood disorders, weakness of the respiratory system, throat infection and skin disease.

Marriage
A June Husband- As, a husband he is good. He is intelligent and talented. He should get a wife, who understands him. Though he has lot of interest in women, he is not flirtatious.
A June Wife- She is an intelligent companion to her husband. She keeps herself always busy and likes to take active part in social life. She is not much interested in home life. She likes discipline, and commands obedience. She makes agood wife to a doctor, or lawyer, or industrialist.

Note- Before selecting your lucky jewels, colors and days, please refer to your individual number.